It’s probably impossible to have never heard of the Acer Liquid Mini before. Popular by its phone code – E310 – this is a smartphone that entered the mobile market in April 2011. Coming with a 3.2 inch display with capacitive touchscreen, this device is powered by the Android 2.2 operating system. If owning it, you started noticing a few problems that bother you, it might be the case to hard reset the Acer Liquid Mini E310.

There’s no need to worry about the negative effects of the process, though, as this is a perfectly safe thing to do on your phone. While being able to bring the device back to factory software, it will also make sure to remove all viruses by erasing the user data. To avoid losing any of your pictures, music, videos or other important documents, you should save everything on the external micro SD card or a PC of your choice.

Using this Acer phone, you can easily open the apps tray and have access to notifications by dragging the necessary trays down. Thanks to its large screen and the nicely designed interface, you can give most commands by using simple motions and taps on the screen. Equipped with A-GPS support, this phone is also great for listening to music – it has an integrated stereo FM radio and supports most reknown music file types. 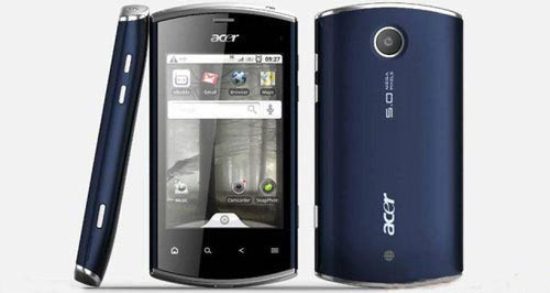 Its internal storage capacity is of 512 MB RAM and 512 MB ROM while the separate card can save another 32 GB of files. There is only one 5 MP camera available on the device, and it can record 480p@30fps videos. Apart from that, a document viewer is included for Word, Excel, PDF and PowerPoint documents, and apps such as Facebook and Twitter are already installed for free.

If you’re planning to sell the phone to another person, you will probably want to make sure that all files are erased from the device before doing so. In addition to that, it is also important to bring the Acer back to its original state of functioning. However, if you have been saving files on the phone since you bought it, you might want to use them again. To make this possible, you can make a backup by using an external device and an app such as the PhoneCopy one.

To solve minor software issues, you could also use a soft reset. This operation can be performed by pressing and holding the Power key until all apps shut down and the phone turns off. Once it is switched off, we recommend removing and reinserting both the battery and the memory card. This being done, you can simply turn the phone back on by using the same button as before.

In case this solution failed to do anything for you, we’d like to suggest using the hard reset buttons shown in the image below:

Alternatively, you can use the menu to do the same as stated above. This is a good solution for those of you whose phone still opens most applications and responds to key commands. Do this in case you choose this method: